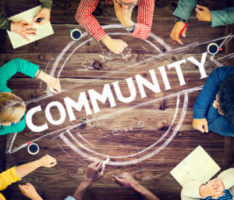 Like so many others, I start my day with a bowl of cereal and the morning news. It seems that most of the stories focus on tragedies throughout our country and throughout the world. I always look forward to the occasional positive story. Stories where people step up and go out of their way to help others.

This morning there was a story about a man that rolled his SUV off of the side of the road and down a slope. The police were able to pull him from the burning vehicle but the slope was too steep to pull him up. Several citizens pulled over, got out of their vehicle and along with the police, formed a human chain in order to save this man. As he was pulled to the top, his vehicle exploded in flames.

Next up, was a story on Hurricane Mathew and the devastating flooding. A lady was interviewed and talked about how everything was going to be alright because they are all pulling together as a community. This got me thinking about many other disasters in the past, including Sandy, Ike, and Katrina.  There were wild fires in California, Tornado’s in Alabama, blizzards in the northeast and just a few months ago, floods in Louisiana.

Having worked in the credit union space for over 25 years, I am consistently impressed how credit unions step up in crisis to help others.

For most of us that are not directly impacted by these regional disasters, it’s hard to imagine the challenges that survivors and communities face. For many, it often takes months and even years to recover. It is estimated that over 146,000 homes were damaged in the Louisiana floods which was characterized as the worst US natural disaster since Hurricane Sandy.

According to an estimate from Goldman Sachs, Hurricane Mathew may have inflicted as much as $10 billion in damage. Current figures would make Mathew the 22nd-worst storm since World War II.

These disasters are affecting communities throughout our country and in many cases, insurance is only covering a portion of the damage which leaves families and businesses to fend for themselves.

Having worked both for and with credit unions, I can’t imagine being associated with a better group of people. As the southeast continues to recover from this most recent event, I have no doubt, credit unions will play a key role in the rebuilding of their communities.